Field observation: C content
Monthly DOC and POC concentrations at the outlets of the Thao, Da, Lo and in the main branch of the Red River showed that no clear spatial or seasonal variation was observed for DOC concentrations whereas POC varied significantly both spatially and between the dry and rainy seasons (Figure 1). 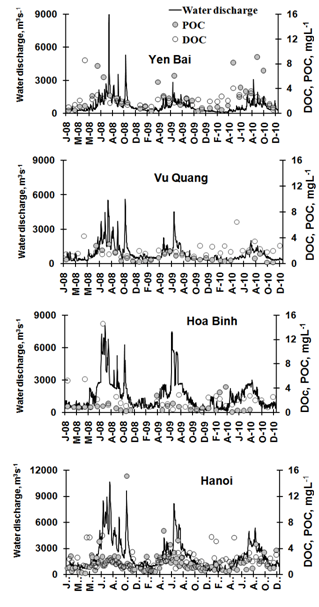 Figure 1.Seasonal variation of water discharge and DOC and POC concentration at the four gauging stations: Yen Bai (Thao river), Vu Quang (Lo River), HoaBinh (Da River) and Hanoi (downstream main axe of the Red River). Note difference in scale on the left-handy-axis for the lower panel (Hanoi). (Le et al., 2017, accepted)
The dissolved inorganic carbon (DIC) contents of the Red River were higher in dry season (from November to next April) than in wet season (from May to October) (Figure 2).

Figure 2.Seasonal variation of DIC contents at 4 observation sites of the Red River during the period 2008 – 2013 (Le et al., 2015)
Carbon outgassing from the Red River system
The in-situ measurements of CO2 emissions towards the atmosphere were carried out by three methods: calculation of CO2 fluxes either using a floating chamber connected to an IRGA, or determining pCO2 within the water column using an equilibrator or calculation via CO2 partial pressure pCO2 basing on the total alkalinity and pH values measured with the CO2-SYS software method. These two latter methods gave similar results whereas the first method is not applicable for a large river as the Red River.
The riverine water pCO2 was supersaturated with CO2with respect to the atmospheric equilibrium (400 µatm), averaging about 1590 µatm, thus resulting in a water–air CO2 ﬂuxes of 28.6±19.3 mmol.m-2.day-1 for the whole Red River system. The results showed that CO2 outgassing rate from the water surface Red river network was characterized by significant spatial variations, being the highest downstream HoaBinh dam and in Hanoi, the main branch of the Red River. The highest value obtained at HoaBinh may reflect the important impact of a series of large dams (Son La, HoaBinh) in the Da river, and then leading to the higher value observed in the main downstream Red River branch at Hanoi after the confluence between Da, Lo, Thao rivers.
Differences in CO2 outgassing were also observed between day and night. A difference between the dry season and rainy season for the five sites was also observed of the Red River system during sampling campaigns in 2014 (Figure 3). 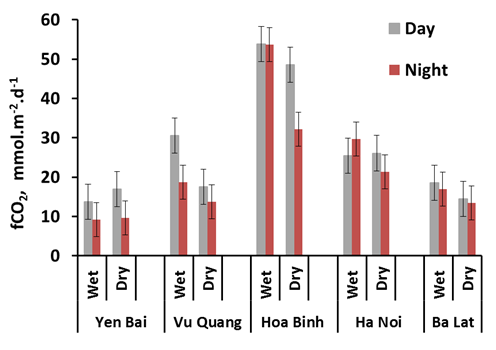 Figure 3: Spatial and seasonal variation in day and night of CO2 flux out-gassing from the Red River system (Le et al., 2017, in preparation).

Modelling results
The model was run for five years (2009 – 2014) and compared with the observed temporal changes in bulk OC concentration and that of its biodegradable fraction for both POC (Figure 4) and DOC (Figure 5). In general, the model simulations of the temporal variations in OC concentrations followed the same patternand reproduce the right level of values as that of the in situ data measurements, although the simulated concentrations was often lower for POC and higher for DOC, especially at the Vu Quang station (Figure 4, 5). 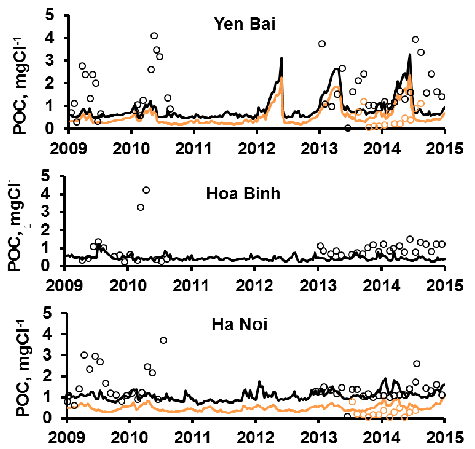 Figure 4. Model simulated (black line) seasonal variations of POC (mgCL-1) and biodegradable POC (BPOC, mgCL-1; yellow line) for six stations in the Red river system for the years 2009 - 2014. The points represent the measured values of POC and BPOC at the different stations. BPOC was only determined at Yen Bai and Hanoi. (Nguyen et al., 2016 submitted) 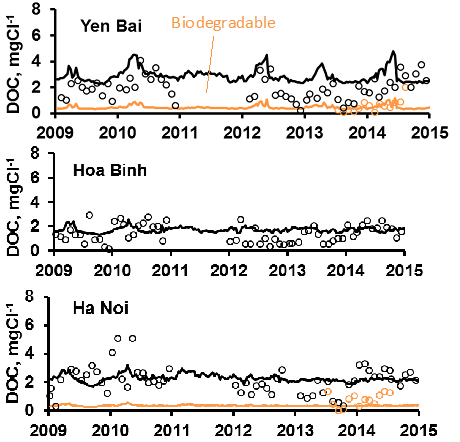 Figure 5. Model simulated (Black line) seasonal variations of DOC (mgCL-1) and biodegradable DOC (BDOC, mgCL-1; yellow line) for six stations in the Red river system for the years 2009 - 2014. The points represent the measured values of DOC and BDOC at the different stations. BDOC was only determined at Yen Bai and Hanoi. (Nguyen et al., 2016 submitted)

Overall, the Red River system appears to be a strongly heterotrophic system, receiving high amounts of allochthonous organic carbon from diffuse sources (soil leaching and erosion, with only limited biodegradability), and from wastewater inputs (with high biodegradability). In contrast, autochthonous primary production only contributes about 10% of the total OC inputs. About half the total inputs of OC to the system are respired and lost to the atmosphere, while the remaining part is exported to the estuarine and coastal zone (Figure 6). These results further underline the importance of tropical rivers and estuaries in the global carbon budget and highlight the need for more research on these systems that represent 66.2 % of the total global freshwater flow (Huang et al., 2012).

Long term observation/calculation of riverine carbon fluxes transferred to the coastal zone
Based on
i) the relationships between POC, DOC, and DIC, with suspended sediment concentrations and with river water discharge respectively
ii) the available detailed historical records of river discharge and suspended sediment concentrations, the long-term variations of the riverine organic and inorganic carbon concentrations and fluxes of the Red River system were examined for the period 1960 – 2015.
The results showed that seasonally, almost all the Red River carbon (POC, DOC and DIC) flux deliveries were transported to the estuary during rainy seasons (May to October) (> 75%). Spatially, among the three main tributaries of the upstream Red River, the highest carbon loads were transported through the Da River (1,666±753 kton.yr-1) due to its higher river discharge whereas the Thao and Lo Rivers were equal in terms of total carbon transported (906±354 kton.yr-1 and 870 ± 211 kton.yr-1, respectively) during 1960 – 2015 period. Overall, the total carbon fluxes of the Red River transferred to estuary significantly decreased from 2,816 ktonC.yr-1 in the period 1960s to 1,372 ktonC.yr-1 in the period 2010s  (Figure 7) in which, the proportion of organic carbon fluxes also clearly decreased, from 40.9% in 1960s to 15.9% in 2010s due to the important dam/reservoirs impacts despite the clear increase of deforestation and population in the whole river basin. Actually, DIC fluxes notably dominated total carbon fluxes of all three tributaries Thao, Da and Lo and the main axe of the Red River system. 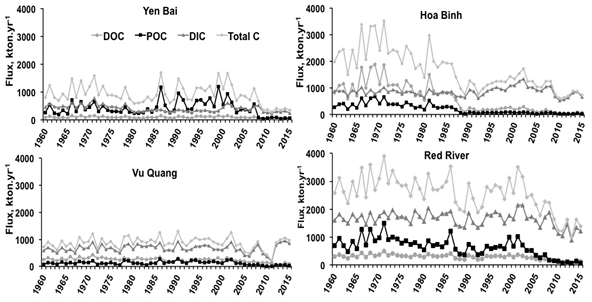 Figure 7: DOC, POC and DIC fluxes of three main tributaries Thao, Da and Lo rivers and of the whole Red River system (Le et al., 2017b, in preparation).
Login to download
Sign up