The long-term discrete existing data (since the 1960s) of the Red River, including water quality, land use, population, agricultural and industrial development, hydrological management, and meteorological data have been collected from different sources, such as previous scientific research project, data published in the national books, reports or data from different official agencies …
+ To collect and synthesize the long-term discrete existent data (since the 1960s) of the water quality, industrial and agricultural wastewater, meteorology, hydrology, population and landuse of the whole Red River system in both China and Vietnam terrain;
+ To collect the data for prospective scenarios: climatic data (air temperature and rainfall); new reservoirs implementation, land use with intensive agricultural practices, industrial activities, population and urbanization increase of the basin in the 2050 horizon.
The data collection are used for:
All collected data have been synthesized and selectively presented in the part “Data - Document”.
(For detail, can be login or contact to download.)

2. Synthetizing dataset collected from different sources for the long-term variation of natural conditions and human activities in the Red River basin

Climate and hydrology
The climate in the Red River basin is sub-tropical East Asia monsoonal type, wherethe South West monsoon from May to October brings warmer, wetter weather in rainy seasonand the North East monsoon from November to next Aprilbrings cooler, dryer weather in dry season. Annual rainfall strongly varies from 700 – 4,800 mmyr-1 across the basin with about 80% of rainfall occurring during the rainy season (May to October). The rainy season cumulates 85–90% of the total annual rainfall in the Red River catchment. July and August are the two months with the highest incidence of typhoons in the Red River area.
The average daily temperature varied from low values of 14 – 16° C in winter to higher values of 26 – 27oC in summer. Relative humidity was high throughout the year, averaging 82 – 84%.
The climate results in a hydrologic regime that is characterized by high runoff during the rainy season and low runoff during the dry season.
The daily river discharges at the outlets of the three tributaries Thao (Yen Bai station), Da (HoaBinh station) and Lo (Vu Quang station) and of the main axe of the Red River downstream at Hanoi stations were collected for the period 1960 - 2015 from the Ministry of Natural Resources and Environment of VietnamMONRE (2015). The average river discharge of the Thao (at Yen Bai), Da (at HoaBinh), Lo (at Vu Quang) and in the main axe at Hanoi stations were 721 ± 159 m3.s-1;  1,674  ± 284m3.s-1;  1019 ± 227 m3.s-1 and 2,502 ± 477 m3.s-1 respectively for the study period.
The analysis of the daily and monthly river discharges at three main tributaries shows a significant relation to austral oscillations (ENSO). Over the considered period, the analysis of the cumulated sum of deviations from the mean (cusum) reveals inter-annual fluctuations with a frequency of 3–7 years, closely following the variations of the Southern Oscillation Index (Figure 8). Besides these variations, no evidence appears of any long-term trend of change in the hydrological regime, on either the annual water discharge or the water discharge in the dry or wet season. 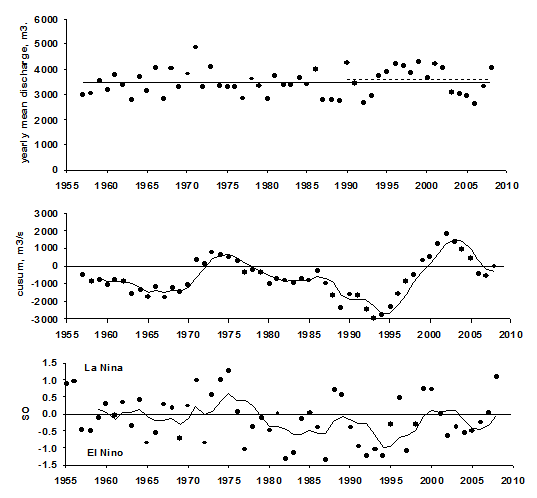 Figure 8. Similarity of the trends of variations of discharge and Southern Oscillation Index.a. Long-term variations of the water discharge of the Red River at Hanoi (entrance of the delta area). The solid line indicates the long term average; the dotted line, the average calculated for the period 1989-2009.;    b. Cumulated sum of discharge deviations from their long-term average value (i.e. cusum, Page 1954). The solid line represents the floating average of the cusum;   c.The long-term variations of the mean annual value of the austral oscillation indices (SOI). The solid line represents the floating average over 5 years. (Le et al., 2015b).

Reservoir impoundment
Reservoirs play an important role in the socio-economic development of both China and Vietnam. Reservoirs are used for flood control, irrigation, hydropower, water supply and flow management.In the Red River basin in both China and Vietnam territory, a series of reservoirs and dams have been constructed and operated.In the Chinese part, upstream of the Red River, there are a series of small and medium reservoirs/dams which have been impounded for hydropower since 2007: 29 dams constructed on the upstream Thao River(2 main intercepting dams, namely Namsha and Madushan (140km from the Vietnamese border to China) have a capacity of 130 and 300 MW, respectively (IMRR, 2010)); about 11 small hydrological dams on the upstream Da River; and at least 8 hydropower reservoirs on the upstream Lo River (Ha and Vu, 2012). In the Vietnamese part, there are four large dams/reservoirs including: the HoaBinh (in operation since 1989) and the Son La (in operation since 2010) reservoirs dammed on the main axe of the Da River; the Thac Ba (in operation since 1975) and the TuyenQuang (in operation in 2010) reservoirs on the Lo River. Other reservoirs are presently under construction such as the HuoiQuang and Lai Chau reservoirs (in operation in 2017) on the Da River (Table 1).
Table 1. Major characteristics of the large reservoirs/dams in the upstream Red River basinand water discharge output from dams to downstream river.
Population and urbanization
For observation of long-term demographic changes, the FAO data showed a clear increase of population in Vietnam in term of total population and urban population within the 1950–2050 period. According to FAO statistics (FAO, 2009), the total population in Vietnam increased from 27.4 million in 1950 to 83.6 million in 2005, and should reach 118 million in the 2050s (Figure 9).
Even if the urban population has increased rapidly, the rural population still accounts for the largest proportion in the country (about 80% in the 1990s), typical characteristics of the social organization in Vietnam. The analysis of the population data given by villages in the Vietnamese Red River basin showed that 80% of the population lived in agglomerations numbering between 1000 and 10,000 inhabitants (Figure 9). 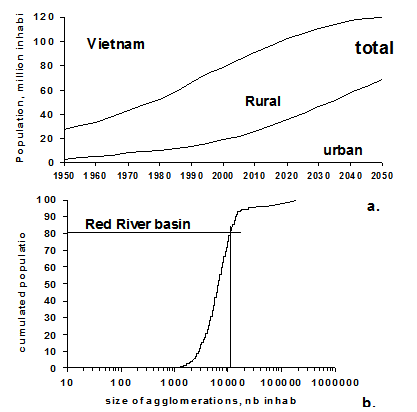 Land use
The forest area in the Red River delta has been quite stable for several centuries but the deforestation in the plateau and mountainous regions dramatically accelerated during the war years (1970s) and the following period of rapid population growth and economic development (1990s) (Figure 10). 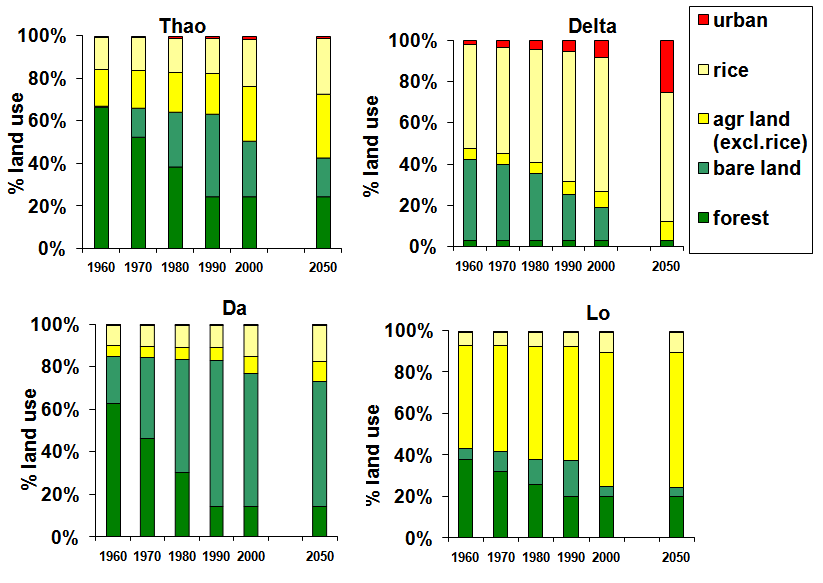 Figure 10.Long-term variations of land use of the Red River sub-basins: Thao, Da and Lo and Delta. The bars are representing, for each decades, the estimated proportion of forest, bare land, agricultural land (excluding paddies), rice paddies and urban areas in the total land use (Le et al., 2015b).
Login to download
Sign up